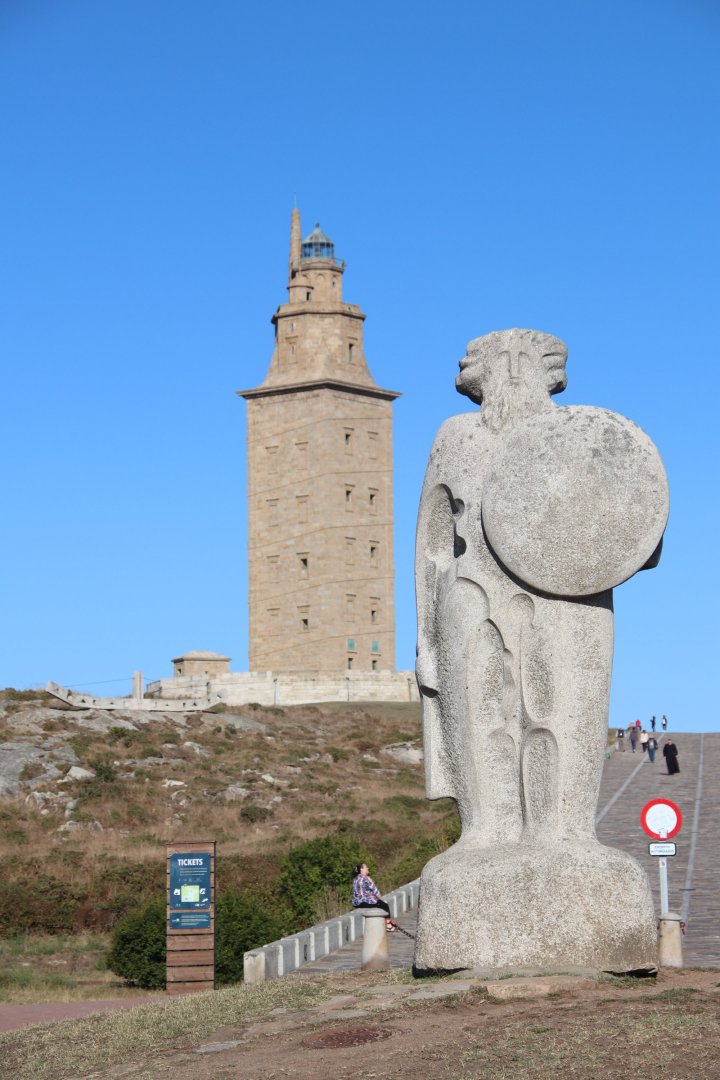 Blog number seven, welcome.We had a over night stop at Pontevedra our first stop in northern Spain as we mentioned in blog six.

We’re now moving up to the north western corner of Spain, Galicia known as Green Spain, a lot more chance of rain here.We where coming here last year, but the weather was terrible so we missed this north western part out, and headed south for some good weather.We really want to visit Galicia, so we’re going what every the weather this year.

Galicia is so different from the rest of Spain it has a unique culture and language of it’s own. It is home to Santiago de Compostela one of Spain’s most beautiful citys and the goal of thousands of Pilgrims to visit the cathedral. We came to Santiago last year you can read all about it on last years blog number five.

We’v come here to see the wild rugged coast line 1200 kms long, the majestic cliffs and inlets, and the fishing villages. The best sea food restaurants in Spain, we know we’ve tried it 🦑🦐🦀🐙.

So we’re heading to the most western point in Spain Finisterre. We found an aire near by a village called Fisterra. A lovely aire looking over the Atlantic ocean and the harbour, so we booked in for four days.

First thing we noticed was the forest on the side of the mountain was on fire. Great big clouds of smoke coming down around us.

The owner of the campsite said it would be out in about 6 hour’s We have a unique way of putting fires out.

Three sea planes came over the sea and scooped water up as if they were landing then taking off again, and dropping it on the fire. 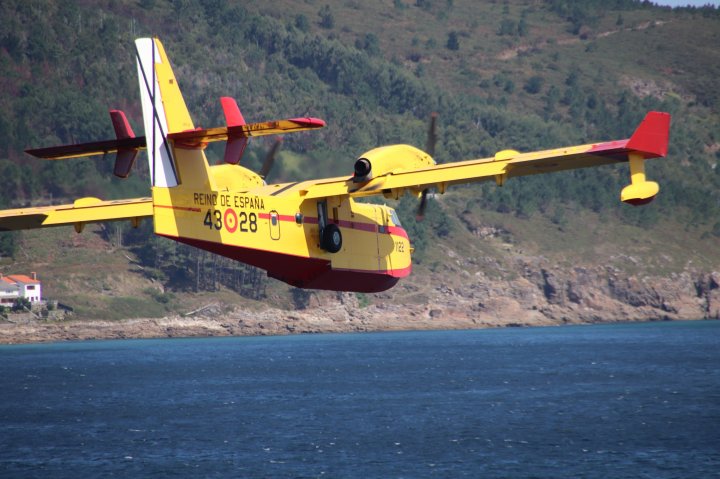 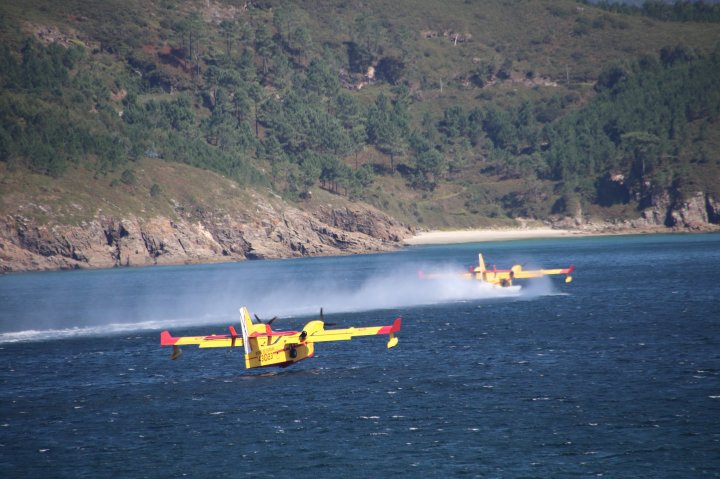 A great way to put the fire out, it was out by the end of the day. Well done to the pilot’s it must be difficult picking up heavy water then taking off again.

Fisterra is small fishing village, and it’s their annual festival weekend so plenty to see and do. 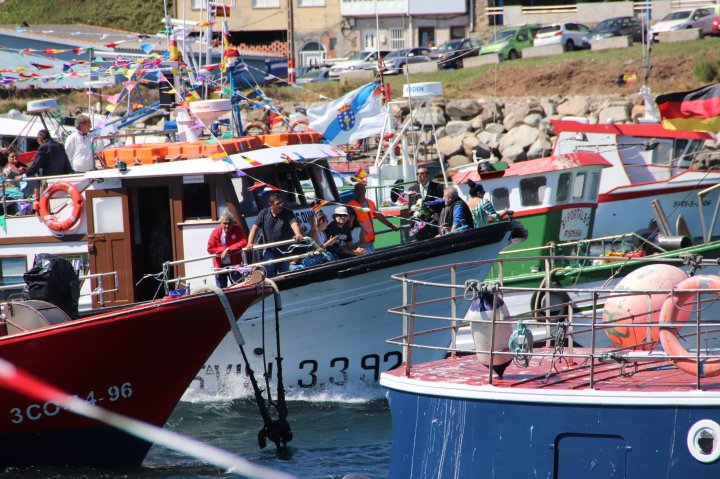 During the day the festival was around the harbour with boats racing, bands parading and some religious ceremonies. On the night time lots of pop music.

It was like Take That meets West Life. They where good singer and dancers, but after three groups all sounding the same we’d had enough. Back to the van for night cap and bed, 2 pm.

We met up with Vic and Julia from Lowestoft, parked next to us on the campsite. Thanks for your company.

It’s a lovely camping site with great views of the Atlantic from our van.

Today we’re going to Finisterre the most western point in Spain it’s 4 kms away we are going on a tractor/train. 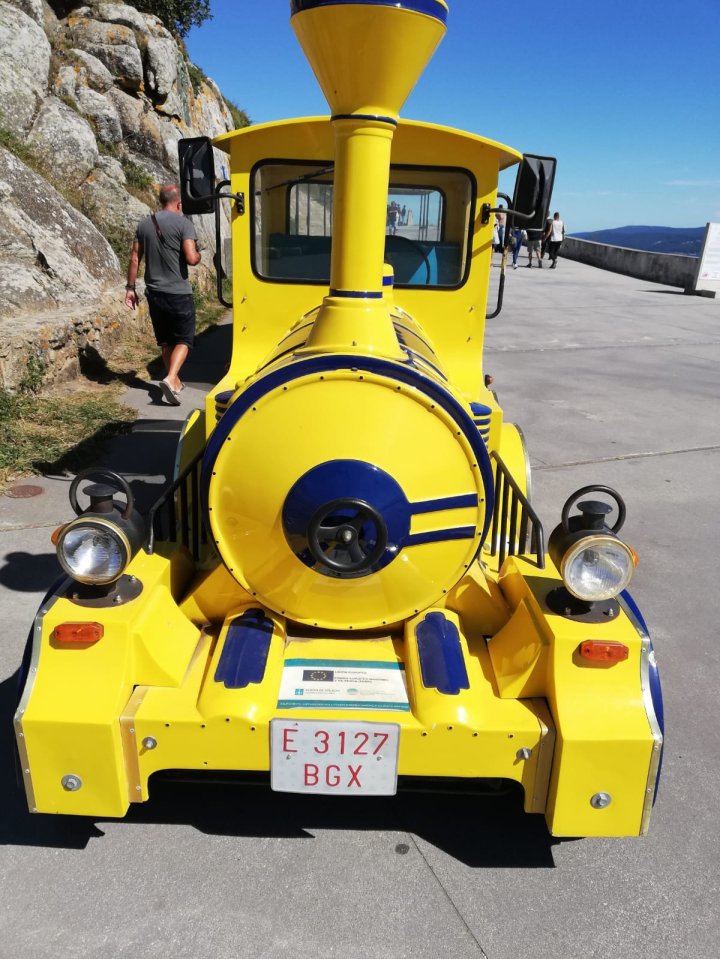 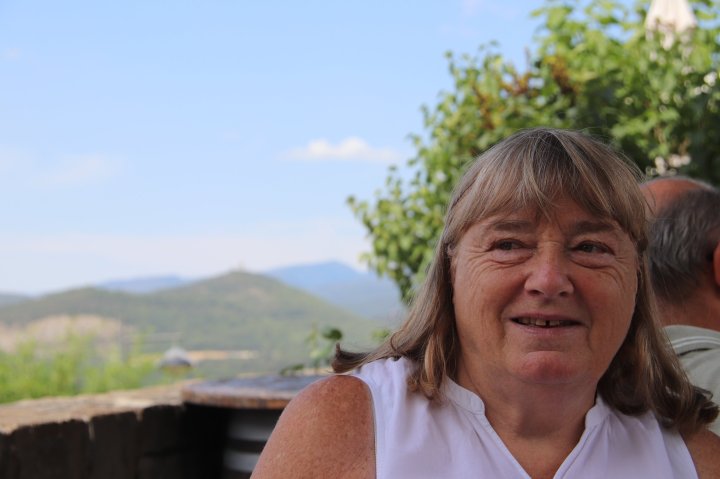 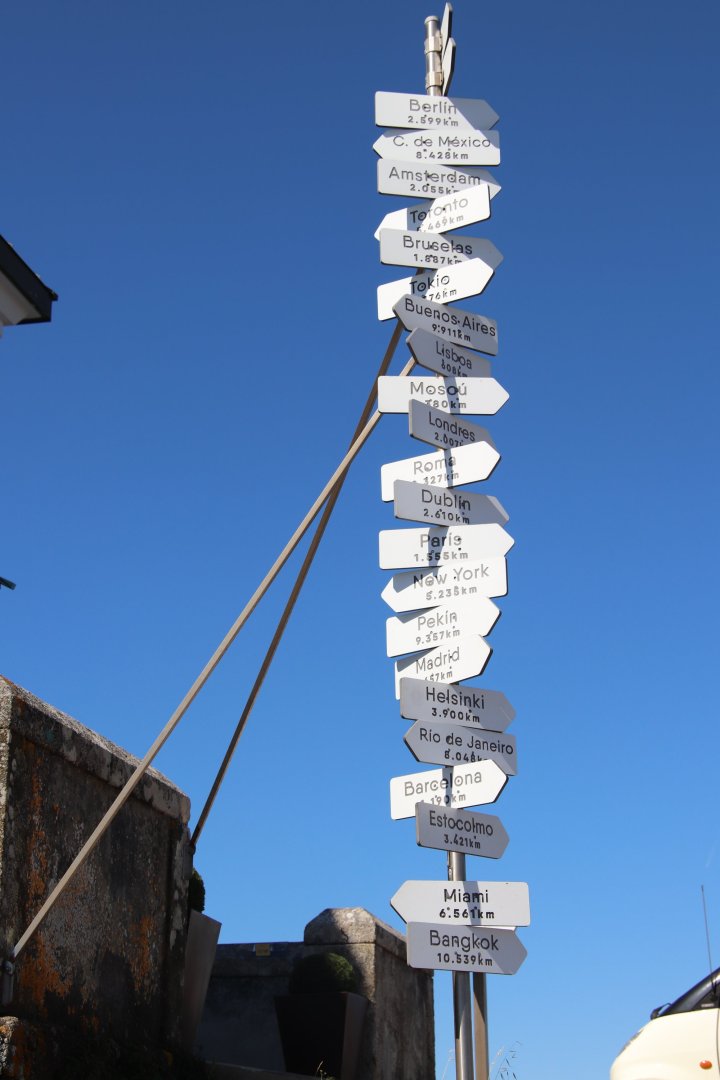 Finisterre is known has lands end, the most western point in Spain.

This is were the Pilgrims come to finish there Pilgrimage. And climb down the cliffs and wash their socks and T shirts in the sea. 🙄🙂We’v had a great time at Fisterra.👍

Now were going to A Caruna it’s about 60 kms away.

We stopped at a village called Muxia had a look around did some shopping at a supermarket.

Moving on now to A Coruna. A Coruna is a busy port city with lots of industry. The other half is a tourist centre with lovely beaches and lots of history.We found an aire no facility’s but we where allowed to stay for 72 hours, that was ok we had plenty of water and had emptied our tanks, free to park. Just behind where we are parked, is a

World heritage listed Tower of Hercules. A Lighthouse built by the Romans in the 1st century AD, you can climb up the 234 steps for a great views of the city.

They built things to last in them days . legend attributes Hercules to having built it, but it was the Romans who originally built it, So iv been told.

There is a great walkway and cycling track 13 kms long, all around A Coruna.So we went and had look around.

The lamp posts all have 4 ceramic pictures on them we thought that was very nice. 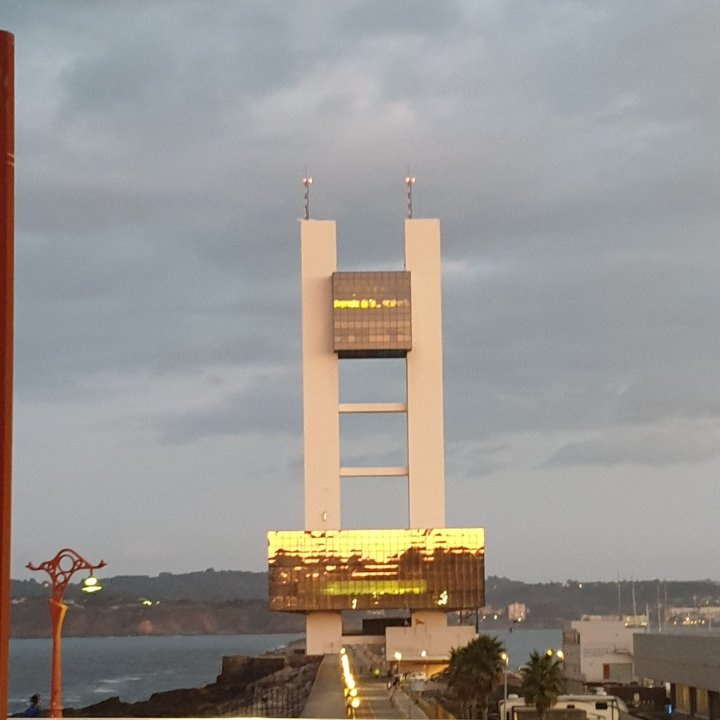 The new town and old town were all very interesting to visit. A Coruna is a very smart city worth a visit, or a holiday.👍

We’re move along the north coast line of Spain, three more towns worth a visit Ferrol, Carino and Ortigueira. We enjoyed them all but stayed in Ortigueira by the swimming pool next to a inland sea. For the night.

Next up Porto de Bares a peninsula with a light House the northern tip of Spain. 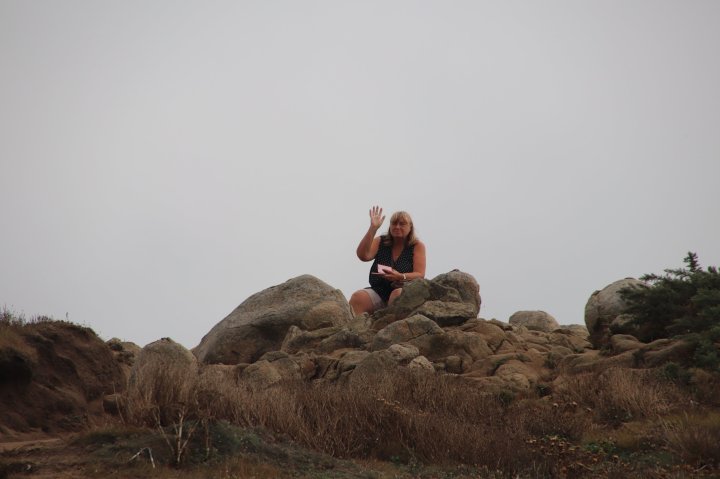 It was a bit misty, but still so beautiful on the massive cliffs looking out over the Atlantic ocean.

We are going to stay the night at Porto de Barnes bay, just 3 kms from the lighthouse, another beautiful place, the north of Spain is fabulous.

Porto de Barnes bay is beautiful, it’s built on the mountain side quite difficult to drive in very narrow.

Motorhomes are allowed to park right on sea front for 48 hours for free, thanks Barnes Bay. Three lovely restaurants to choose from.

We had a meal out that night and it was great value. Scallops and lamb chops with a nice mixed salad starter and a bottle of wine asyoudo🙂. Iv got to say northern Spain is different from the south of Spain. The land scape is different and the architecture. It’s not as hot, but the weather is ok just now, we’v had 23° but it’s been a bit cloudy and misty.

Next up Foz, we’re going to an aire with a washing machine. we need to catch up on a few things like washing and cleaning the van.

When we arrived and got parked up, I noticed that my rear tyre was a bit flat. With in 2 minutes it was completely flat. I was pleased I was on a campsite. I checked it and it had a split on the inside of the tyre about 3 inches long.

So i rang my breakdown insurance up and they came out in an hour, and changed it for the spare wheel.That was fine but I still needed a new tyre. I found a tyre house about 2 kms away, so i got my bike out and went and ordered one.

It will be delivered the next day 3pm. I’m pleased it didn’t blow while we where on the motorway.😖 All jobs done so let’s have a look around. 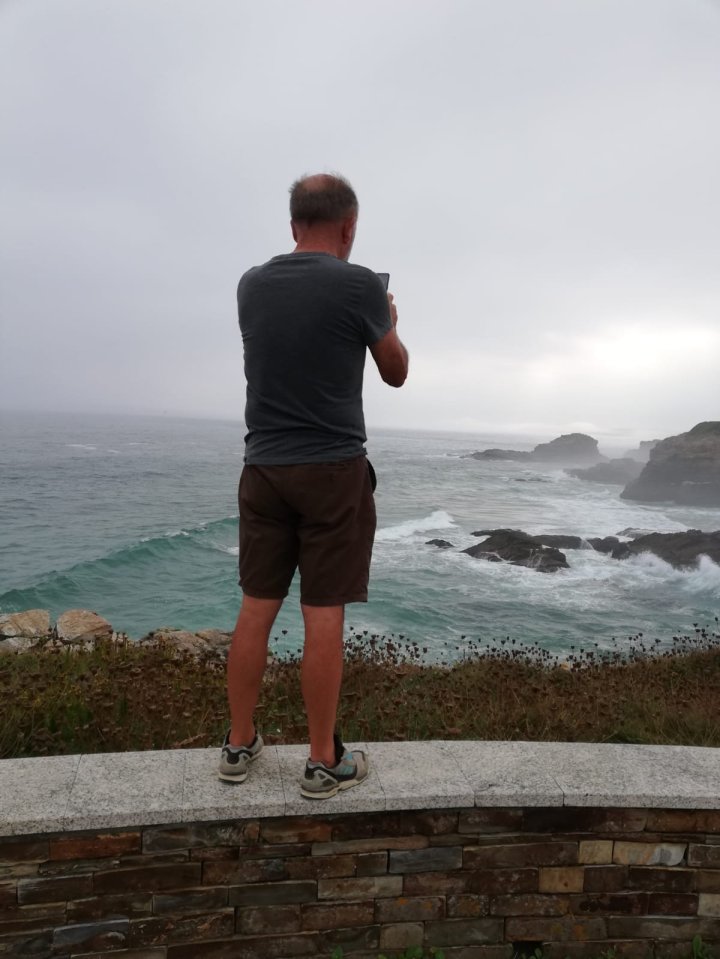 We are loving the fabulous scenery on this northern coast of Spain so wild and natural. So we decided go for a 6 km walk along the cliff top to Foz town. What with cycling and walking we have never been so fit lol. We had a lovely walk to Foz and back, great views even though the weather was a bit dull. We’v had wall to wall sunshine all the time we’v been on our travels this year and not one drop of rain. So mustn’t grumble.

All for now thanks for reading x Derekpat x