We are off on our travels again to France Spain and Portugal, but a different route. We’v service the van and filled it full of clothes, food, tools and everything we can think of, but we’ll have forgotten something no doubt. 4 am on the 27th June we set off for Portsmouth, to catch the 2 pm ferry to Ouistreham in Normandy. We left Portsmouth harbour on a lovely sunny day we sat on the deck watching the boats and super super yachts and Isle of Wight pass by with a drink as you do.

When we got past the Isle of Wight the weather changed and it became a bit windy and the rocky. We were walking about the ship like drunken men. Pat didn’t like it very much she’s not a good sailor. But no one was sick and we got Ouistreham in good time 9 30 pm French time. Off we went to our first aire parking at Hermanville sur mer 6 km away.

We’d only done 3 km when the exhaust broke in the middle making a noise like a tractor.

That was good start,😖 I only had it serviced a month ago and asked them to check the exhaust. We made it to the aire parking. I rang the breakdown insurance up and arrange for them to come to us next morning at 8 30 am. The breakdown man arrived on time and wired the exhaust up and we followed him to Caen 12km away. Fixed and back on the road 10 30 am.

We are next to the Normandy beaches so we went and had look around. Arromanches near the gold beach, where the British 50th infantry invaded France on D Day June 6th 1944.

We’re moving on to meet up with my friend Dick Hobson, who’s on holiday in Normandy staying with a friend of his Tom Ryan. Who’s lived here for 20 years. He lives in a 300 year old farm house near a village called St Georges right out in the sticks. What a beautiful place so peaceful.

We arrived at 5 pm we were made very welcome. Tom made us a lovely Shepherd pie washed down with bottle of wine. Then off to the pub 4 km away. We met up with some of Tom’s friends French and British we had great time drinking and talking.

We have had a lovely two days with Tom and Dick giving us great hospitality👍. We’re now moving on from Normandy to Brittany first stop in Brittany Dol de Bretagne. We spent just one night here, we went and looked around the town and had few beers.

Bretagne is a nice town but we used it as a overnight stop. Next stop we’re going to the north coast of Brittany a place called Hillion. We found a aire on top of the cliffs, fantastic place so we got parked up for a few days. The weathers been good while we been here, about 21° to 26°, not like it is in central France in the 40s . So we’re staying in Brittany for a week or so. Hillion is lovely town but very quiet the shops never seem to be open. But the coast is spectacular, we went for a long walk along the cliff tops great views. The sea along this coast goes out for miles then comes running in very fast. It can be dangerous lots of warning signs.

We’v had a great time here at Hillion, we could stay longer maybe come back sometime, but we’re moving on to Plougasnou. We parked up on the marina with 15 other motorhomes.

This part of Brittany is very rugged and wild but beautiful. So we got our walking boots out and went for a walk along the rugged shore line. Not big cliffs here but a very rocky coast line were the sea goes out for miles.

We found a pub near where we are parked and it was open! so off we went for a drink. We got talking to a French man he said he’d been to England a few times, we told him we were from Hull. Turns out he was in a shanty band and had sang in Hull about 3 or 4 times at the shanty festival, what a coincidence. We had a good chat with him and he knows Shanty Jack, a well known shanty man from Hull. 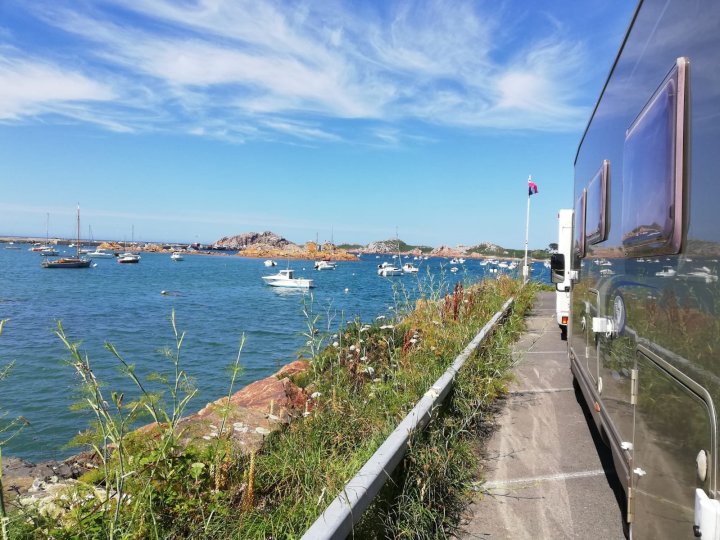 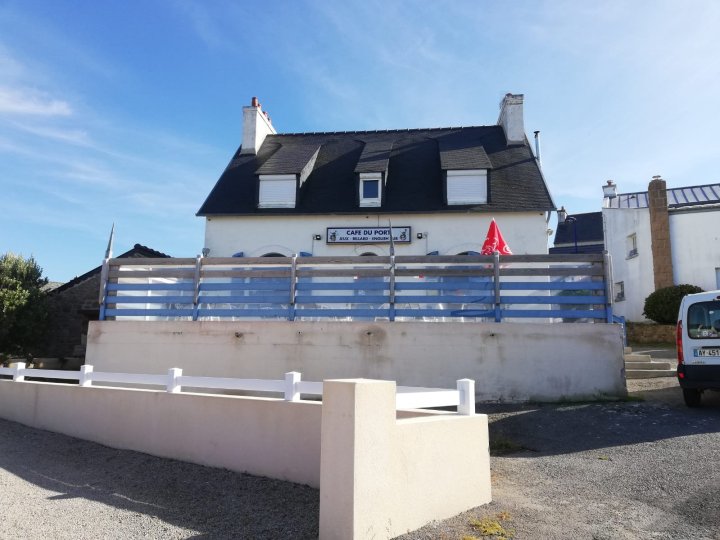 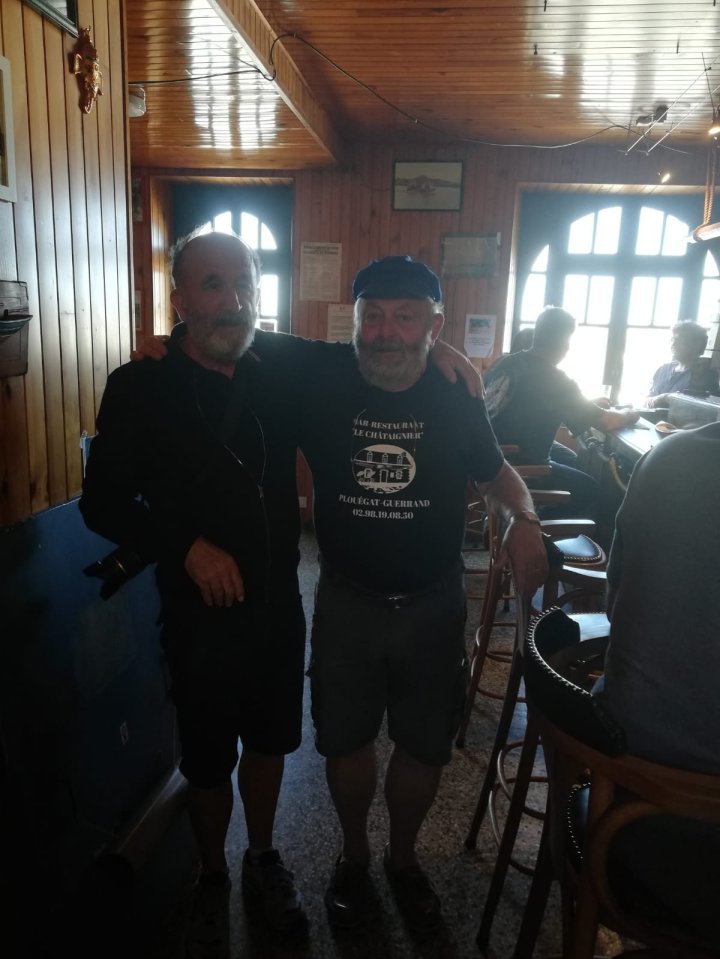 We had very interesting night talking and drinking as you do. Great to meet Fanch le Marrec and his friend Jean Paul Ferrel, shanty band Chants de Marins . What a lovely part of the world, Next morning we moved on to Roscoff.

Roscoff is a ferry port were you can sail to and from England. The town is full of old granite Houses dating back to the 16th century. There’s a unique church in the centre of the town with spectacular belfry. The architecture is fabulous. There are Some lovely beaches around Roscoff.

We’re on moving from the north coast to the north west coast of Brittany. To a place called Camaret sur mer. Out on a peninsula in to the Atlantic ocean a beautiful little town. We’re parking on an aire that as room for 74 motorhomes. It’s 7 € a night with all facilities. Not bad but this is the first time we’v had to pay. Lots to see around here so we’re getting our folding bikes out. Off down a hill to the town and harbour didn’t have to pedal once. Bit worried about going back up lol. What a lovely place a big natural harbour and town with cafes, bar and shops. 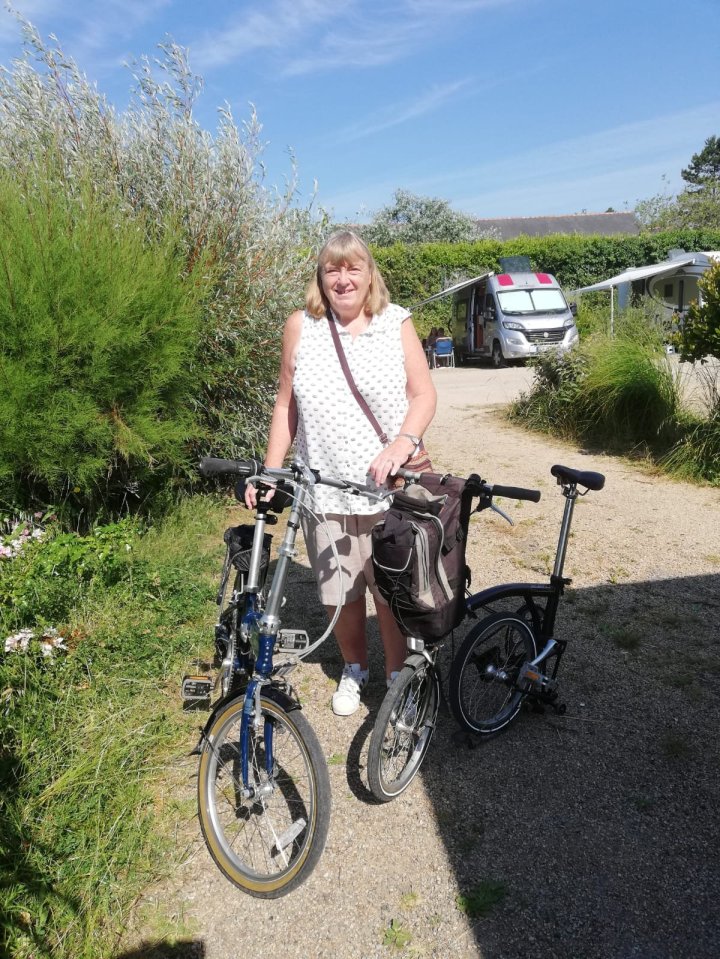 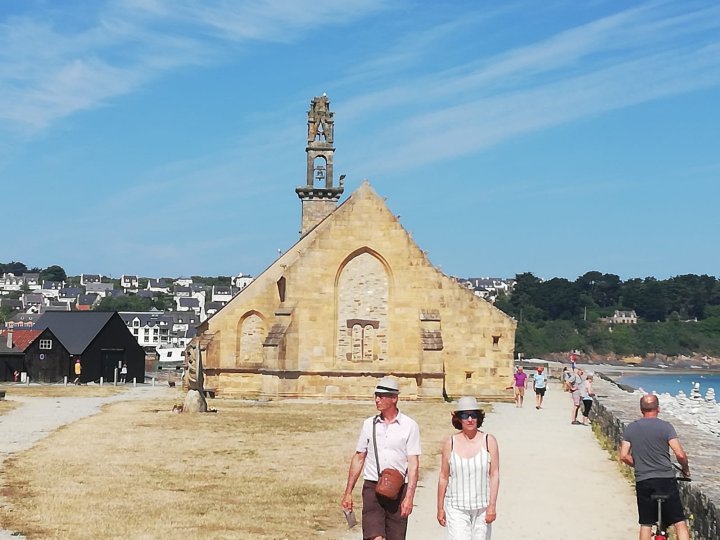 Camaret is on the western edge of Crozen peninsula. A fishing village not so busy now, was France’s largest crayfish port. Now it attracts artists and lots of galleries. but it’s a beautiful town worth a visit. Next up we decided to go to Pen hir a spectacular headland with steep sea cliffs. But we had to cycles up that steep hill we came down. But When we arrived it was worth it.

Pointe de Pen Hir, is fantastic scenery and a German bunker. A great place for walking enjoying the scenery.

We have had fantastic time in Brittany we’v been lucky with the weather, we’re only 120 miles from Britain. Brittany is very much like Cornwall lots of rocky bays and country side is very similar. We love Brittany😎. we’ll be back. Tomorrow we are moving farther south. Catch us on blog 2.

This is a text widget, which allows you to add text or HTML to your sidebar. You can use them to display text, links, images, HTML, or a combination of these. Edit them in the Widget section of the Customizer.
Loading Comments...
Comment
×
%d bloggers like this: