Here we go again blog 9. We’re moving on been in Faro 5 days the capital of the Algarve. Next stop Tavira. Tavira is one of the Algarves most attractive town’s. It’s built around the Rio Gilao.

We parked near the fresh meat, fish and vegetables market. We needed some food so that was our first job. What a fantastic market it is, every thing we needed on the fresh food side and very cheap. We got a chicken for €2.80 and good size . It’s very cheap to live in Portugal food in supermarkets, drinks in bars and eating out is very reasonable. The only thing thats more expensive is diesel €1.45 a litre. 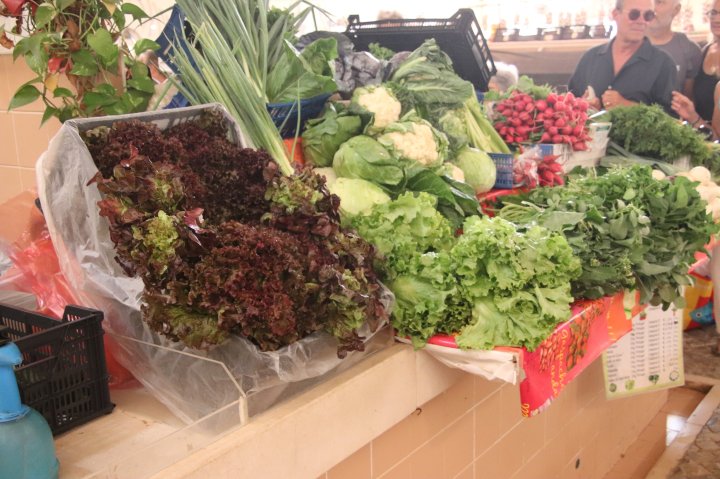 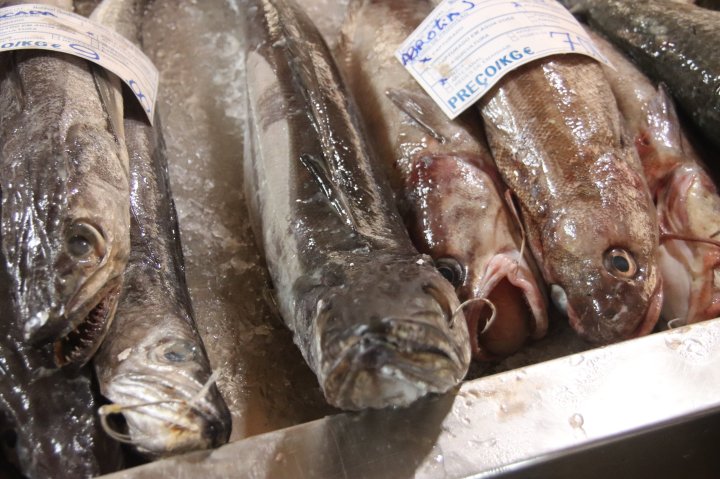 So we settled in at Tavira for 4 days. Next we went for a walk in the Town. What a lovely place a Warren of cobblestone streets, historical building, Roman ruins and a seven arched bridge built by the Romans. Lots of restaurant, shops and we found a Irish bar the Black Anchor, with music on that very night. So we went out on the night and drank some Guinness. 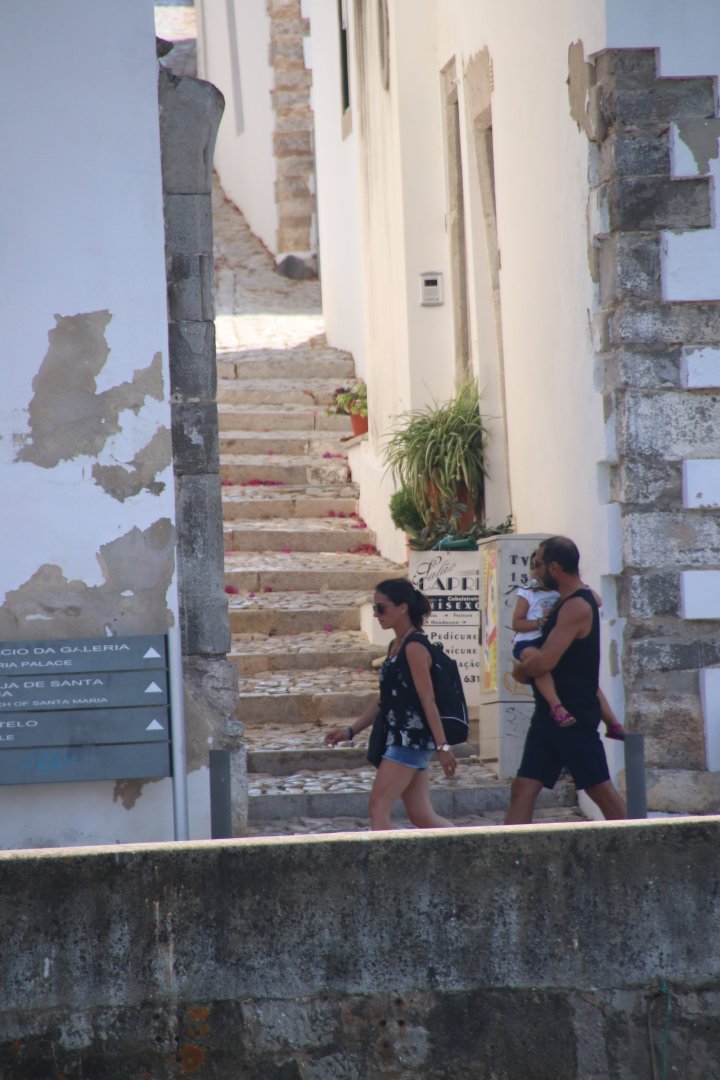 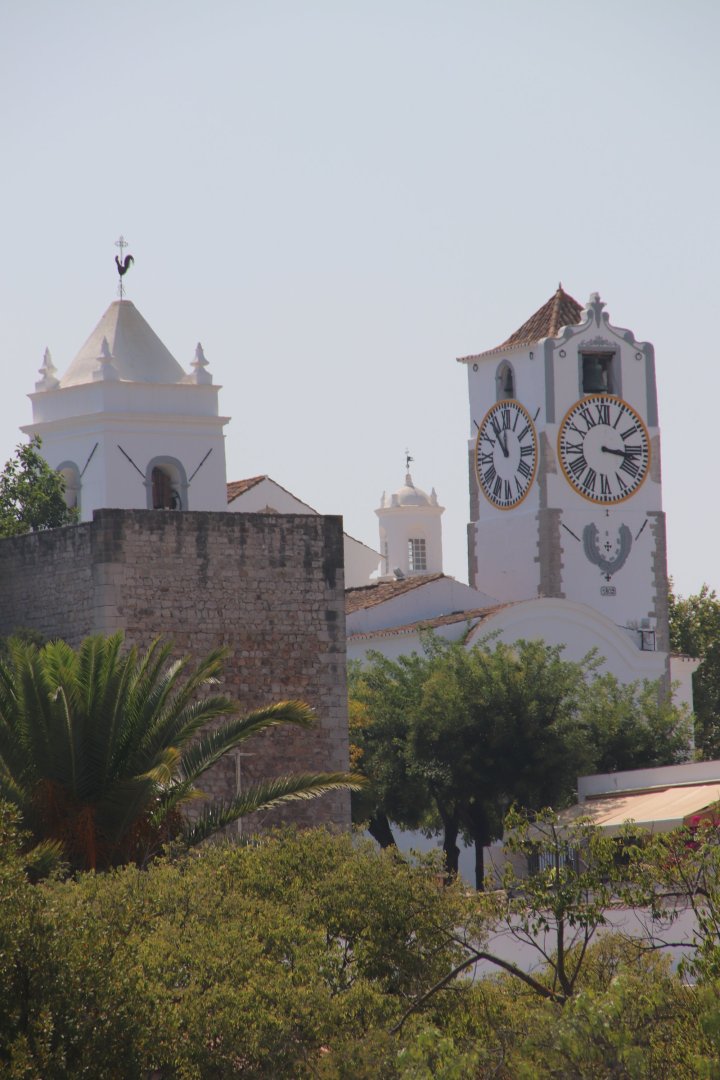 The weather’s been very hot 35° so we decided to go to the beach. Were there is a nice strong breeze because it’s on a desert Island. Ilha Tavira is just off the coast a sand dune Island a twenty minutes boat ride. It is stunning with unspoilt beaches.

We spent most of the day there lazing around, swimming in the sea, great fun in the big waves. And keeping cool in the lovely breeze. And guess what we found A beach bar. (Doug).

We had a lovely time on Ilha Tavria and in Tavira town we would go again one of nicest places on the Algarve. Tomorrow we’re moving to Altura.

Only 15km to Altura it’s a small seaside resort we thought we could chill out how wrong we were. We didn’t like the parking area for motorhomes much. We had a look around the Town the beach was nice, but the Town had nothing going for it, it was bland. So we decided to stay the night and move on the next day.

Big mistake we got invaded by mosquitoes in the van never seen so many. They were inside the van and outside, a massive swarm of them. We had all the fly tap nets down on all the windows and doors. How they got in we don’t know. Unfortunately we had no fly spray. Every time we kill some of them, more reappeared. It was a nightmare. We didn’t get much sleep that night. We where up early next morning off to the supermarket for some fly spray. We sprayed the van with it and went and had breakfast in the supermarket cafe. The worst thing was that Pat got stung about 200 times or more and she was not feeling to well to say the least. I had put aftersun cream on all over me and I only got stung a few times. We don’t think mosquitoes like aftersun cream. We came back from the cafe and inside the van was full of dead mosquitoes. 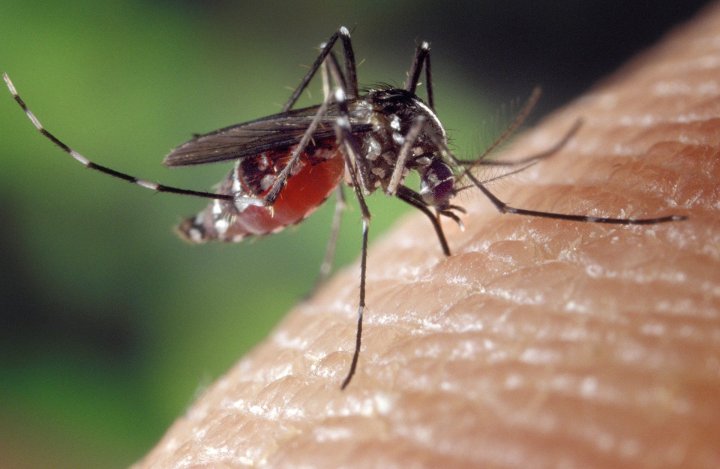 We now think they got in through a small gap in the door fly net. I’ve now repaired it.

We are now moving inland somewhere quite. Were Pat can rest. Odeleite is our next stop and it was just what we wanted. It’s near A lake called Odeleite river also known as The blue Dragon lake because of it’s shape

We are in the mountains parked next to a hunting lodge, with all fercilites and wi fi only €4 a night. The views from the van are fantastic. 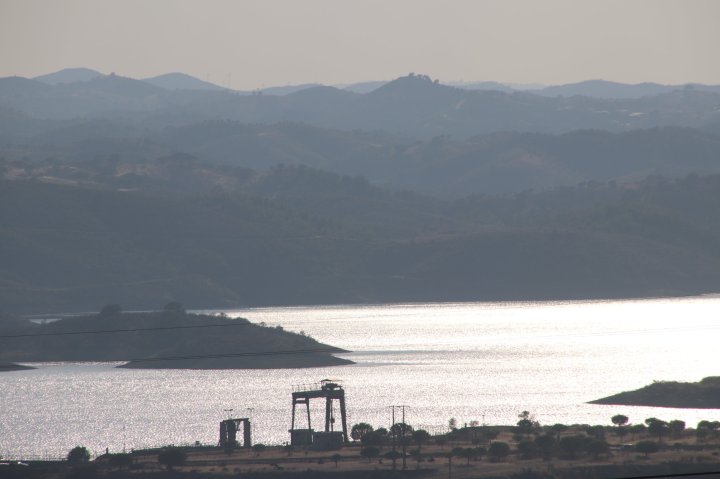 We cleaned the van of all the dead bodies and got the van back ship shape as we like it. Then we chilled out for the rest of the day. We are on our own up in the mountains. No other motorhomes on site although there was room for 20 vans. Not much traffic on the road below us so peaceful. We are on top of the world. As night came we sat out side and had our meal and watch the most beautiful sunset. 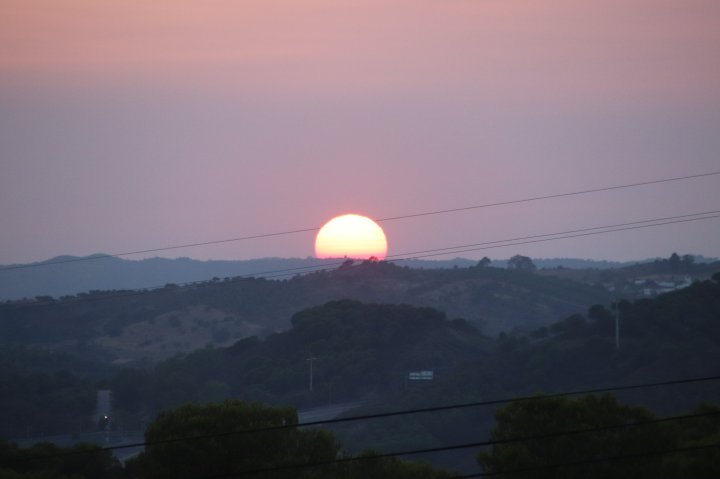 We liked it so much in the mountains, so we decided to move 10km to Alcoutim. A small village still in the mountains. Another good parking aire this one was free. A lovely Village on the banks of the river Guadiana which marks the border with Spain. We had a walk around Alcoutim a few shops, restaurant’s a small promenade and a river beach. Also across the river is a the Spanish village of Sanlucar de Guadiana. There was no bridge but you could get a ferry over to it. Both village’s had castles to look around so plenty to do. 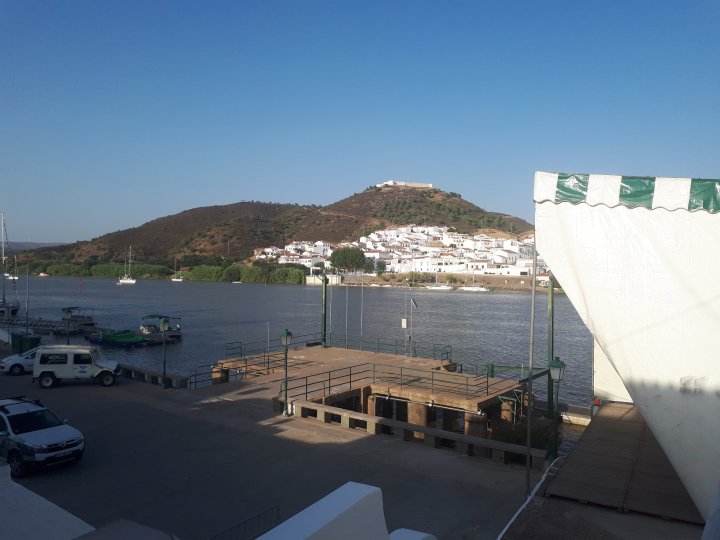 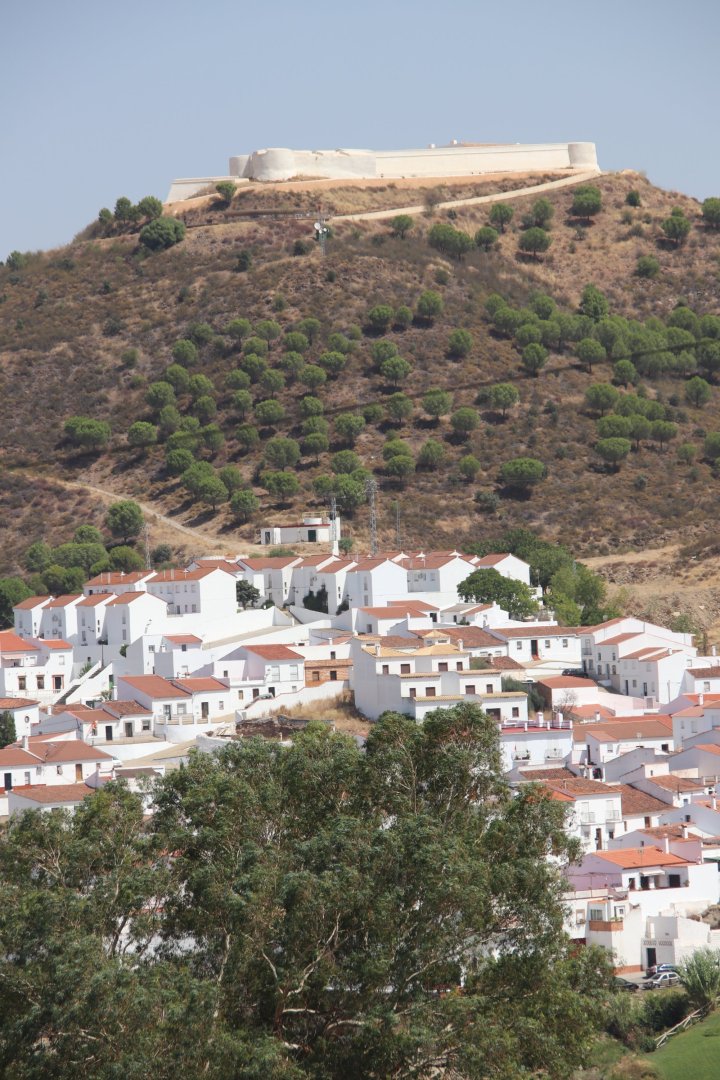 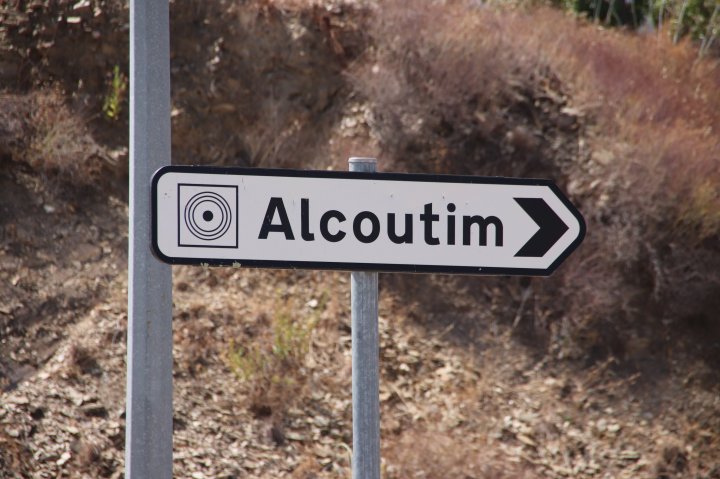 We had a very pleasant 3 days at Alcoutim. This will be our last stop in Portugal because we’re moving to Spain. Huelva Is out first stop in Spain 100km Away.

Huelva is a industrial city, certainly not on the tourist trap route. But it looked interesting to us. We are parked next to the sea just a small beach. But a cycling track Into the Town. So next morning off we got on our bikes. Every where we’v been in Spain, Spain has great cycling tracks and Huelva is no exception. We followed the cycle tracks along the sea in to the Town about 3km. A very modern town centre. A great city to visit. 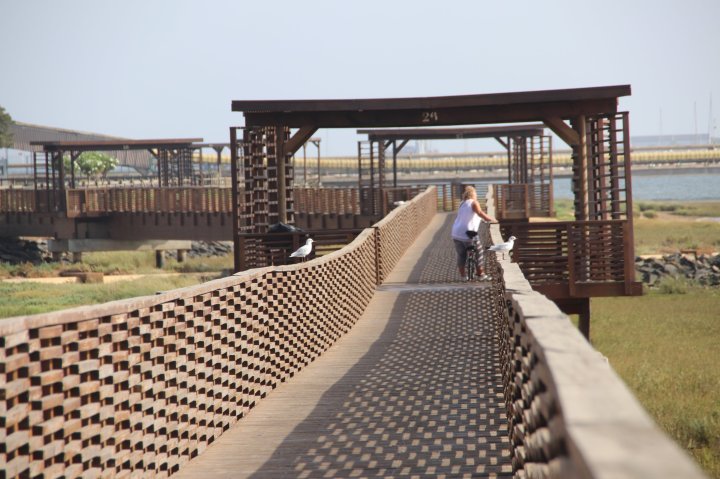 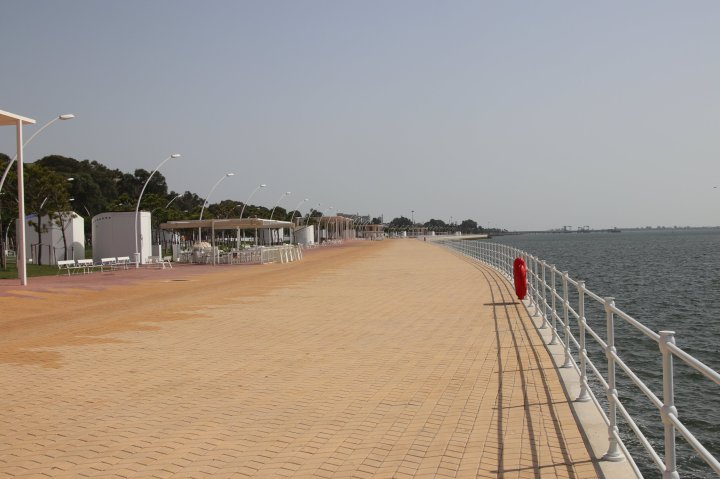 In 1870 The British mining company Rio Tinto built a iron pier out into the Odiel Estuary. To export its mining products through the docks. It’s still standing and as been restored. And is now a walking and jogging platform on two levels.

The place we are parked there is a monument to Christopher Columbus. He departed from Huelva on 1492 on his way to discovering the America’s. On the first week in August Huelva celebrate Columbus with six day festival of music and Bull fighting. 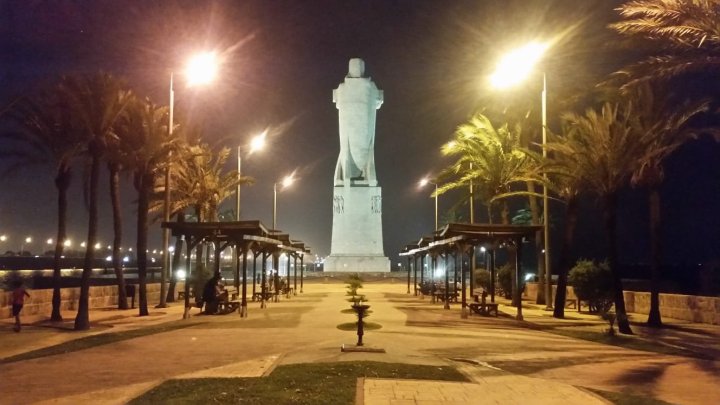 What a lovely time we’v had at Huelva. A very interesting City

120 KM to Seville all motorway so only took just over an hour. We booked a secure motorhome park just ten minutes walk to the centre.

Seville is one of the city’s we wanted to visit, and we weren’t disappointed. It’s got it all. Beautiful parks, fabulous building, a massive over the top Cathedral (where Christopher Columbus is buried). Monuments to just about every one. And lots of oranges. Seville sure is a beautiful city. What more can I say, you need to visit to understand. It was a very hot day so we stopped off at the Hard rock Cafe. They put us in a room with picture of dead rock stars. Not to happy about that lol. But the Bergers are very good And so was the beer. 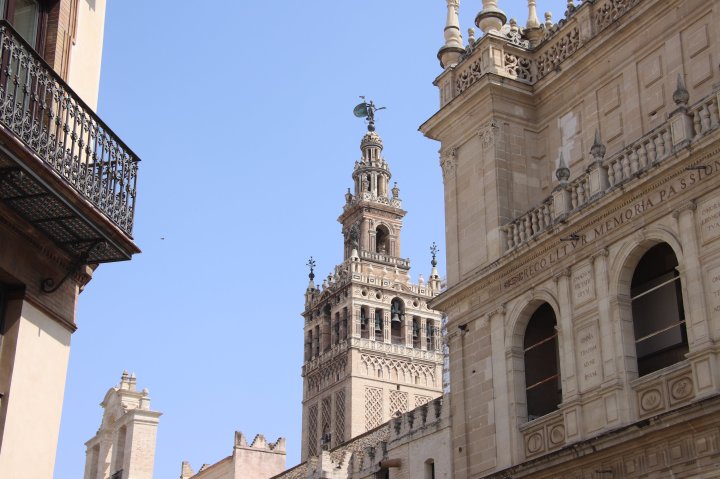 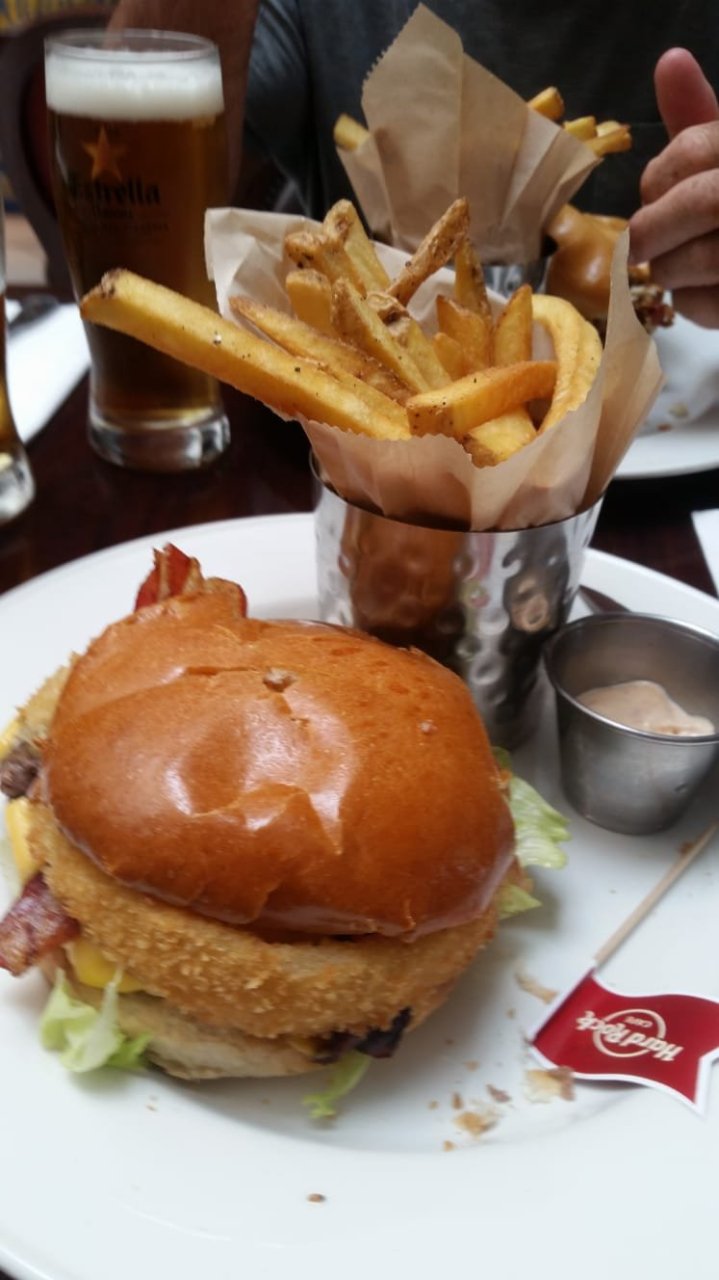 We were going to stay in Seville two days. But it was to damn hot. So we’re off again to Rota on the west Atlantic ocean coast on the Costa de la Lux.

It’s definitely a bit cooler in Rota and it’s flat so we’ll be doing some cycling on the cycle tracks. 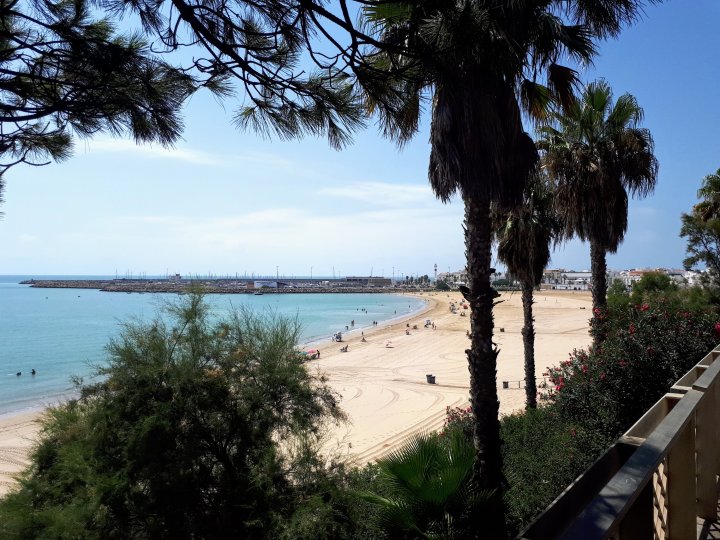 We are right up to date now in Rota. we’d like to visit a few places around here.

Then down to Tarifa and Gibraltar.

Thanks for Following us. Give us a like send us a message we’d love to hear from you all. derekandpat.com

This is a text widget, which allows you to add text or HTML to your sidebar. You can use them to display text, links, images, HTML, or a combination of these. Edit them in the Widget section of the Customizer.
Loading Comments...
Comment
×
<span>%d</span> bloggers like this: